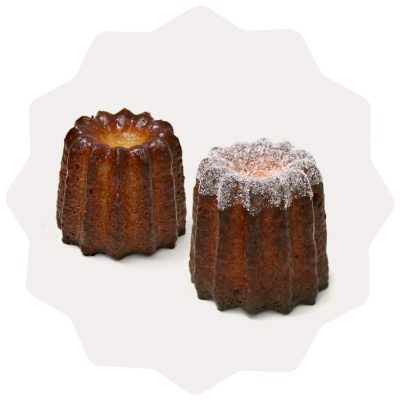 If you order our Canelés by post, you can freeze and reheat the Canelés in the comfort of your home. Instructions are provided in the box.

Original Canelé:
A caramelised crust with a soft custardy heart, this original Canelé is lightly scented with natural vanilla extract.
Contains milk, gluten (wheat), and eggs. Made in an environment that handles nuts and soya. And alcohol free.

Aged Rum Canelé:
A caramelized crust with a soft custardy heart, this Canelé is flavoured with aged dark Rum.
Contains milk, gluten (wheat), eggs and alcohol. Made in an environment that handles nuts and soya.

Orders to be sent by post will be delivered to you by Royal Mail before 1pm on Wednesdays.
Please order by Fridays 2pm